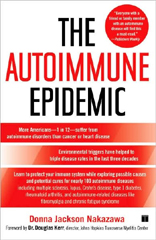 Foreword to The Autoimmune Epidemic
by Douglas Kerr, M.D., Ph.D.

As a faculty neurologist and neuroscientist at the Johns Hopkins Hospital in Baltimore Maryland, I have spent the last decade evaluating and treating patients with autoimmune disorders of the nervous system. I founded and continue to direct the Johns Hopkins Transverse Myelitis (TM) Center, the only center in the world dedicated to developing new therapies for this paralyzing autoimmune disorder. Increasingly, I see that more and more patients are being felled by this devastating disorder. Infants as young as five months old can get TM and some are left permanently paralyzed and dependent upon a ventilator to breathe. But this is supposed to be a rare disorder, reportedly affecting only one in a million people. Prior to the 1950s, there were a grand total of four cases reported in the medical literature. Currently, my colleagues at the Johns Hopkins Hospital and I hear about or treat hundreds of new cases every year. In the multiple sclerosis clinic, where I also see patients, the number of cases likewise continues to climb.

Something in our environment is creating this crisis. What you will read about in the following pages is a powerful and touching and scholarly exposé of what those things may be.

The immune system in our bodies is charged with an amazingly complex task: to recognize and ignore all the cells and tissues within our body and—at the same time—to attack any and all “invaders,” foreign cells, viruses, bacteria, or fungi. Our wondrously complex immune system can successfully protect our bodies while recognizing and eliminating billions of distinct infections with which we come in contact. When functioning well, the immune system immediately recognizes a virus or bacteria that has gotten into our body and initiates a spirited and robust attack on the invader, allowing us to recover from a cold after only a few days. But this precisely choreographed dance between the immune system and the tissues it is designed to protect goes badly awry in autoimmune diseases. In such diseases, the immune system mistakes friend for foe and begins to attack the very tissues it was designed to protect. The soldiers guarding the castle turn and attack it.

But what triggers autoimmunity to occur? Throughout human history, our exposure to such myriad infectious agents has triggered an evolutionary arms race. Our immune system has evolved increasingly sophisticated countermeasures and recognition systems to combat the increasing diversity of the infectious agents with which we come in contact. But this increasing sophistication comes with a cost: an increased chance of the system breaking down. We have evolved right to the edge of the immune system’s capacity.

Now, over the last 40 years, something has been pushing that system over the edge. Something is causing the immune system to increasingly make mistakes in which the line becomes blurred, the immune system attacks the body itself, and autoimmune disease occurs. In all likelihood, much of the reason for this often catastrophic mistake of the immune system comes from the countless environmental toxins to which we are currently exposed—toxins that interfere with the way the immune system communicates with the rest of the body. To paraphrase W. B. Yeats, when that communication is lost “things fall apart, the centre cannot hold.”

The numbers are staggering: one in twelve Americans—and one in nine women—will develop an autoimmune disorder. And since it is clear that not every patient with an autoimmune disease is correctly diagnosed, the prevalence is certainly higher than that. The American Heart Association estimates that by comparison, only one in twenty Americans will have coronary heart disease. Similarly, according to the National Center for Health Statistics, one in fourteen American adults will have cancer at some time in their life. This means that an American is more likely to get an autoimmune disease than either cancer or heart disease. Yet we hear much more in the press about heart disease and cancer than we do about autoimmunity. And this silence is mirrored in relative funding by the National Institutes of Health, the major funding agency for biomedical research in the United States. Though the NIH has expanded funding for autoimmunity significantly over the last several years, the 2003 expenditure of $591.2 million is still only a fraction of the money spent for heart disease and cancer. The NIH budget for cancer is over 5 billion dollars, ten times that of autoimmune diseases. The NIH budget for cardiovascular disease is over 2 billion dollars, four times that of autoimmune diseases. We have not yet recognized the urgency of the autoimmune epidemic.

Why is the prevalence of autoimmunity increasing at such alarming rates? There is almost universal agreement among scientists and physicians that the environmental toxins and chemicals to which we are increasingly exposed are interfering with the immune system’s ability to distinguish self from non-self. Most of the risk of autoimmunity comes from environmental exposures rather than from genetic susceptibilities. So, have those environmental exposures changed over time? The answer is clearly yes. One example of this comes from a 2003 study in which blood and urine samples from Americans were tested for 210 substances, including industrial compounds, pollutants, PCBs, insecticides, dioxins, mercury, cadmium and benzene. The volunteers, none of whom had any occupational or residential risks for such exposure, had detectable levels of 91 of these. In other words, these are ordinary people with ordinary lives who have numerous toxins in their body from ordinary exposure. In a 2005 study, researchers found 287 industrial chemicals, including pesticides, phthalates, dioxins, flame-retardants, and the breakdown chemicals of Teflon, in the fetal cord blood of ten newborn infants from around the country—transmitted to the infants by their mothers’ exposures before and during pregnancy.

We are facing both an increasing prevalence of autoimmunity and an increasing exposure to environmental toxins. Is it clear that the increased exposure of environmental toxins is causing the increase in autoimmunity? Several lines of evidence suggest that this jury, too, has issued the verdict — “guilty.” Researchers recently showed that when added to the diets of rats, PFOA (perfluorooctanoic acid, a breakdown chemical of Teflon and one of the chemicals found in the blood panel screenings mentioned above), causes significant impairments in the ability of rats to develop an appropriate immune response. Similarly, other researchers showed that mice given organochlorine pesticides were much more susceptible to getting the autoimmune disease lupus than control mice.

Are these data absolutely definitive? It’s not clear that the type of exposure these animals had is the same type that humans have. It’s not clear that lupus in animals is the same thing as lupus in humans. It’s not clear that a rodent’s immune system is the same as a human’s. Much more research needs to be done on this subject — in the form of both epidemiologic (human population studies correlated with exposures) and animal studies. Meanwhile, the difficulty in finding the smoking gun/definitive evidence of causality is increased exponentially by the number of chemicals to which we are exposed. Do we have to give animals the 287 compounds found in the fetal-blood-cord study cited above to examine their combinatorial effect on the immune system? Not only is such research impractical, it is unethical and probably still wouldn’t be viewed by some as definitive.

There are some who might say that this is nothing more than another case of ranting “the sky is falling” when it’s really not. I suspect those might be the same people who believe that the undeniable warming of the planet is simply a geological cycle that has nothing to do with human activity. But taking these positions—that environmental exposures are not adversely affecting our bodies’ health or that we are not causing our planet to get hotter—is dangerous. To miss the opportunity to change is to not only deny the evidence and miss what may be a fleeting opportunity to reverse these trends, but also, ultimately, a selfish position. What about our children and their children? If we have the opportunity to make a healthier future for them but fail to act either because of indifference or denial, what will tomorrow hold for them?

What is just as disturbing is that only 5.4 percent of the NIH budget for autoimmunity is dedicated to environmental factors that underlie autoimmunity. We need to recognize the urgency of the autoimmune epidemic. And we need to take steps to combat it. Future research is unlikely to define a single cause for autoimmunity, but rather varied triggers that include environmental exposures and infectious agents interacting in complex ways with an individual’s immune system. This research will, in all likelihood, clearly establish the link between these exposures and autoimmunity and will begin to define how these exposures cause autoimmunity. We won’t be able to eliminate autoimmunity in the future. Genetic predisposition and infectious triggers will always be with us. But the fight against autoimmunity needs to be fought on several levels: more extensive research, development of better therapies that more effectively treat these diseases, and action to decrease our environmental exposures. The last action will require personal responsibility, political action, and corporate accountability. If we do these things, autoimmunity will be a cluster of rare diseases that we treat with effective medicines. If we don’t, autoimmune diseases will increasingly devastate families, including five-month-old babies, and will increasingly tax our health-care system. If we don’t act now, it will be too late.

The book that follows is astounding. It is a combination of touching personal stories about individuals affected by autoimmune diseases and rigorous research of the medical and scientific literature. It is the kind of book that will scare you. It will make you angry. It will amaze you with the courage of some of the people described in the book. Ms. Nakazawa examines all of the theories about autoimmunity in detail, from heavy metals to toxic chemicals to viruses to vaccines and finally to the hygiene hypothesis. The Autoimmune Epidemic is every bit as compelling as Upton Sinclair’s groundbreaking novel The Jungle and every bit as necessary as An Inconvenient Truth, the startling movie featuring Al Gore and directed by Davis Guggenheim, that shows us that global warming is upon us and may at some point in the near future be irreversible.

You will leave this book with no reservations about the veracity of the conclusions: put simply, there is no doubt that autoimmune diseases are on the rise and our increasing environmental exposure to toxins and chemicals is fueling this rise. The research is sound. The conclusions unassailable.

Ms. Nakazawa introduces a term, “autogen,” used to describe chemical triggers of autoimmune disease, drawing upon the term “carcinogen,” which denotes chemical triggers of cancer. This term, which should become part of our society’s lexicon, may serve as the clarion call for change that emerges from this book. The change needs to take the forms of personal responsibility and societal change. Companies should have to determine the effect of chemicals in developing autoimmunity as well as cancer, and state and federal legislation is needed to compel corporations to make this happen. This book will inspire you to want to do something to protect yourselves and your loved ones; to do what you can to restore a healthy balance between our environment and our bodies. What that something is will vary depending on the individual. At a personal level, no single recommendation fits all individuals and the degree to which an individual alters his/her environment will depend on the levels of exposures and his or her susceptibility to autoimmunity. The Autoimmune Epidemic ends with a logical and empowering solution to protect yourself and your family and, in so doing, to begin the process of cleaning up our environment in order to help reestablish a balanced immune system in our bodies.